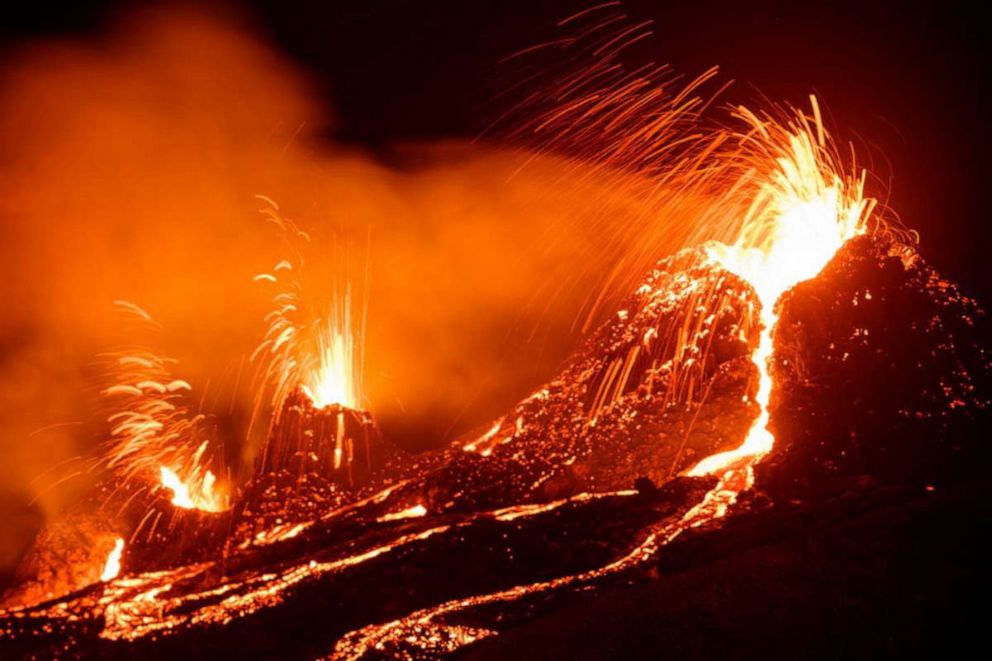 Get the experience of a lifetime. See an active volcanic eruption in Geldingadalir valleys on the Reykjanes peninsula.

Our guide will pick you up in Reykjvík or meet you in Grindavík, what suits you better. Then you will head out for an adventure of a life time. The hike up to Geldingadalir Valleys is about 1- 1.5 hours, the hike is a medium difficulty. After hiking up to the volcano you’ll walk around it and see the hot lava spewing out and new land in the making. We will hike around the Volcano and explore the newly made lava field. Once we’ll find a great spot to sit down and have a hot chocolate and an Icelandic doughnut “Kleina”. For those who like to have a little bit more, we urge them to bring some lunch.

Fagradalsfjall is the newest volcanic eruption in the land of ice and fire, use this amazing opportunity and see the hot lava flow.

Once you’ve hiked around the newly made lava and seen the volcano from all angles we’ll head back to bus and back to Reykjavík, just make sure that you’ll take a piece of the new lava with you.

*Some of the days when the wind is blowing we might not be able to hike all around the volcano, but our guide will take you to the best locations open each day.

What you need to bring

Read more about the volcanic experience in Geldingadalir:

About the volcanic area in Geldingadalir

Though we speak about valleys, since the Icelandic word “dalir” means valleys, neither Geldingadalir nor Meradalir are proper valleys. Both areas are more like a string of basins or shallow valleys.

The name Geldingadalir is a combination of two Icelandic words; „geldingur“ and “dalur”. The literal translation of the word “Geldingur” is eunuch, though in this case it means a castrated animal, more specifically sheep, a wether. The origin of the name Geldingadalir, the Wethers Valleys, is that farmers wanted to separate wethers from ewes and lambs because castrated sheep do not produce milk. The wethers were most likely kept in Geldingadalir during the summer, since the valleys are located on the mountains and the area is referred to as the highlands of the Reykjanes Peninsula.

The name Meradalir is easier on the tongue and simpler to explain. „Meri“ means mare, so it should not come as a shock to learn that mares, and in fact wethers as well, have roamed this area in olden days. The flocks of animals that wandered around those parts were however not big in numbers since the quality of the land were, and have always been, quite meager. The area is sparsely vegetated and farming has never been the main industry on the Reykjanes Peninsula. The number of livestock on the Peninsula have been consistently small and the best example of that is found in the registry for the farm “Hraun” on “Hraunsland” in the beginning of the 18th century. Three rams, four cows, eleven ewes, a few ewe lambs and some lambs. That was it.

This once bare area has now become one of the most popular attractions in Iceland and the challenging and harsh terrain swallowed by tons of molten lava. The eruption could go on for years, even decades, hopefully allowing the public and the scientific community to admire and study its glory for many years to come.