The Viking Adventure Tour in Reykjavík 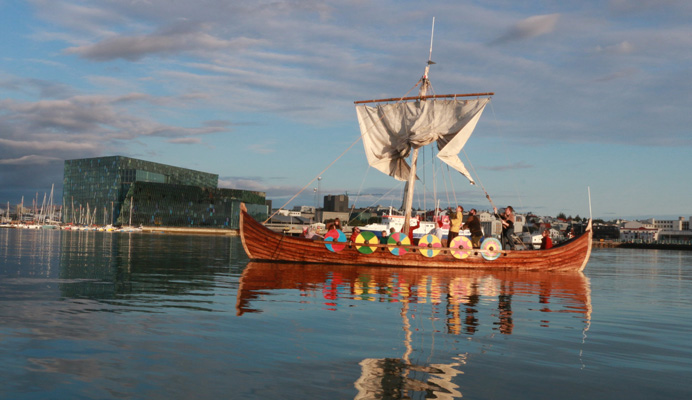 Be a Viking Settler Take on the role of an Icelandic Settler on the Viking Adventure Tour. The winds are favorable. Hoist the sail and embark upon a journey to the Viking age.

It is quite an experience to sail an authentic Icelandic Viking ship during the Viking Adventure Tour. The Viking Tour is 1 1/2 hours and we depart from the Old harbor in Reykjvik. We sail around the islands around the coast of the city where the first men to settle in Iceland, Ingólfur Arnarsson sailed in 874.

The Viking Adventure tour is perfect for families and small groups of maximum 12 people. The children love the adventure of sailing like a viking and you the whole family is together on this journey to explore the Viking Sagas and the wildlife of the Reykjavik Bay. You feel like a Viking on an expedition around the islands in the bay and it is likely that you will spot a puffin or even a whale if they come that close to land. Sailing were the wind will carry you and hearing the sound of gentle waves playing with the ship.

The Gaukstad ship, from which this replica is made, was discovered in Norway in 1880. The original is an excellent example of a trading or transport ship from the faraway Viking past, built of strong oak which stood the test of time. Originally, it had room for 32 oarsmen and could reach speeds up to 12 knots on the open sea.

While you are on the water, be sure to look over the nearby cliffs and islands for the distinct orange beaks and black-and-white feathers of puffins. Cast your eyes over the waves to spot whales and other marine life breaking the surface. It is easy to imagine how sailors in the Viking Age would have welcomed these uplifting sights after many days at sea.

The Viking Adventure Tour is an open boat, so for safety and comfort we ask you to dress according to the Icelandic weather. Wear warm outdoor clothing and proper walking shoes.

For your safety and comfort, you should dress according to the weather and wear good walking shoes. Just like if you would go for a walk around the coastline in Reykjavik. Bring your camera if you want to keep good memories.