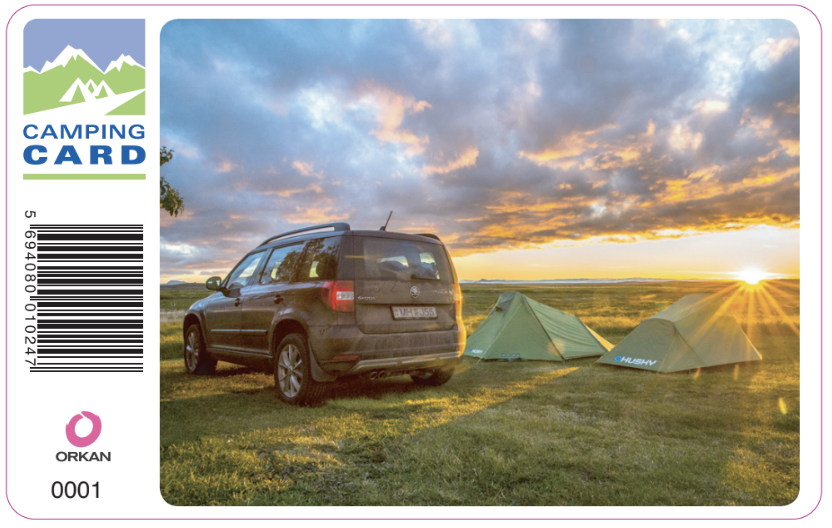 The year 2019 is Campingcard’s thirteenth year here in Iceland. The Campingcard has been a huge success since it first came out in the year 2007. The idea is simple buy one card and gain access to over 40 campsites around Iceland and save a considerable amount of money.

In the summer 2019 we will give out discount cards with the Campingcard for petrol and diesel that counts for 10 Isk pr litre at Orkan stations. The locations of these tank stations can be found in this brochure. It is our hope that you will have a pleasurable holiday in Iceland and will take full advantage of the 40 campsites the Campingcard has to offer.

In the year 2012 the Icelandic government introduced a special tax on lodging which includes campsites. Unfortunately the Campingcard can not collect this tax and include it in the price of the card. Card holders are therefore obligated to pay 333 ISK pr night to the Icelandic government at the campsite they choose to stay at. Notice that the tax is pr card not pr individual. So a family of four only pays 333 ISK for the night.

West Iceland
Two of the largest bays of Iceland, Faxaflói bay and Breiðafjörður bay, are in the western part of Iceland. The islands in the Breiðafjörður bay are so many that for centuries it was thought to be impossible to count them all. The tallest mountain in the Vestland is the famous Snæfellsjökull glacier, of Jules Verne famous story “Journey to the center of the earth“.

Westfjords
The fact that this is the most rural part of the whole of Iceland is no wonder when you look at a map. Cut with deep fjords and high mountains this is rough country, but at the same time truly mesmerizing with its striking beauty.

North Iceland
Compared to most other parts of Iceland, the northern part is relatively urban, with the largest town outside of the greater Reykjavík area, Akureyri, often dubbed the “Capital of the North” The region also has some magnificent natural phenomena to be proud of. Lake Mývatn, Dimmuborgir and the legendary island of Drangey, to name a few.

East Iceland
The many fjords all along the coastline in the eastern part of Iceland are the regions trademark. Another special thing are the Reindeer herds, but the Eastland is the only part where you find raindeer in Iceland.

South Iceland
A unique feature of the Southland is that unlike all the other parts of the country, Southland has no fjords to speak of. It does however boast of countless natural wonders, with places like Mount Hekla, Geysir and the Gullfoss waterfall being the most widely known.

Are you coming to Iceland in 1-3 weeks? Please notice shipping times below.