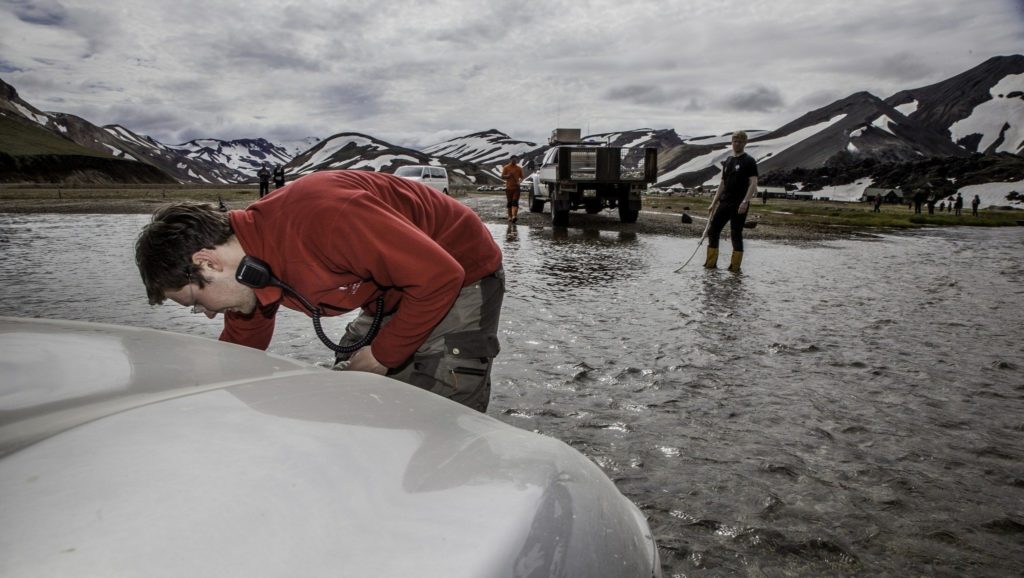 The Icelandic weather and nature plays a big part in how and if you can travel the country to explore all its glory. We contacted Safetravel so we could learn, once and for all, how to stay safe in Iceland.

Safetravel is a project that was officially created in 2010 and managed by the Icelandic Association for Search and Rescue. Many companies and organizations are involved in the project, such as the Icelandic Meteorological Office and the Icelandic Tourist Board. Safetravel’s purpose is to educate tourists so they can easily navigate around the country and stay safe in Iceland.

“Our purpose is indeed to educate about what to bear in mind when traveling in Iceland. Basically, good travel behavior. On the other hand, we also inform travelers about conditions in Iceland every day that could interfere with their travels. Each day we contact tens of individuals to get an update about marked paths, tourist attractions and so on,” says Jónas Guðmundsson, project manager for Safetravel and adds that alerts are put up on Safetravel’s website, Twitter, Facebook and other mediums if people should take extra care when traveling.

Jónas was kind enough to answer a few questions for us here at Must See in Iceland about how to stay safe in Iceland while traveling. We’ll let him take the stage, since he is omniscient when it comes to safety.

What is important for tourists to keep in mind before they travel to Iceland?

“To understand that conditions here are different than most are accustomed to. Not just the fact that we have unpaved and slippery roads and rivers without bridges, but also that we are way behind the norm in the western world when it comes to infrastructure. Roads are generally worse, road service is less than in many places, we have no rules that state that people have to leave their travel plans with someone and so on. In short; we don’t have the sort of control that people are used to in many places around the world.”

What is it that tourists often don’t take into account before traveling to Iceland?

“People overestimate their own ability and underestimate conditions, partly because of lack of infrastructure and control.”

What can people do to stay safe in Iceland while traveling?

“If you intend to venture for 30 minutes or longer away from your car, whether it be summer or winter, you need to have good outdoor clothes, at least two layers of clothing in the winter and three layers if you’re traveling in the highland during summer. You need good underwear with long sleeves and long trousers, a good middle layer as a source of heat and an outer layer that is wind and water resistant.

As to driving, you need to keep two things in mind: Check road.is and safetravel.is at least daily during the winter to see road conditions and if there are any alerts in place. You also need to take into account that even though there is a 90 kilometer speed limit on the ring road, that speed is too fast in the winter because of slippery roads, slush and general road conditions.”

Travelers can leave their travel plans with you at Safetravel. How is that beneficial and do many use that service?

“Almost twenty thousand people used that service last year, most of whom were traveling outside the beaten track for longer or shorter hikes. There are multifold advantages of leaving your travel plan. First of all, people can choose a so-called monitoring which means that they tell us when they will return and alert us when they do return. If they don’t alert us a process is set in motion to track the person in question down. This therefore increases safety, especially if people are traveling alone.

People that leave behind their travel plans also receive text message with all alerts that we put up on the web. In that way, travelers get updates directly in their phone about what they need to beware of. The travel plan also ensures that if something happens, for example if people get lost, we know circa their location and don’t have to waste time to try to figure that out.”

Do you get a lot of questions from tourist that are traveling the country or are planning to come to Iceland?

“We get thousands of questions every month, and even tens of thousands during high season. These are valid and good questions in most cases that we answer or forward them to the appropriate people or places. Now and again we get questions that make us smile, like when people ask us how the weather will be like on a certain day next summer or if Hekla volcano will erupt in three months or a year.”

But can you depend on the Icelandic weather?

“Yes, you can, but a maximum of 2-3 days ahead. The weather forecast at the Icelandic Meteorological Office’s website is quite dependable 72 hours ahead, but not longer. Yr.no and other foreign forecasts are not as reliable.”

To stay safe in Iceland, should you avoid certain places during certain seasons?

“People often don’t realize that the highland is closed from September to June. In Europe, and in various other places, spring starts in March and summer in April/May and that’s why people naturally assume that the same applies in Iceland. They often forget that we are a small island in the north in the Atlantic sea.”

If I’m a tourist in Iceland and get hurt, what should I do?

“When in doubt, call the emergency number 112. Not only if it’s an emergency, but also if you need assistance.”

Are tourists fined if they get hurt and a search and rescue team and/or police are called?

“No and yes. If people don’t respect closures, drive off-road or do something that they shouldn’t do, they could get fined. On the other hand, if people get into trouble, their car gets stuck or they experience other mishaps, they seldom or never get fined.”

We thank Jónas for all his help, and all the other people at Safetravel for keeping us safe 24/7, 365 days of the year!

Did you find this article helpful? Review us on TripAdvisor.

Icelanders have the best milk chocolate in the world

Look out for this lovely chocolate bar!