Welcome to the land of licorice 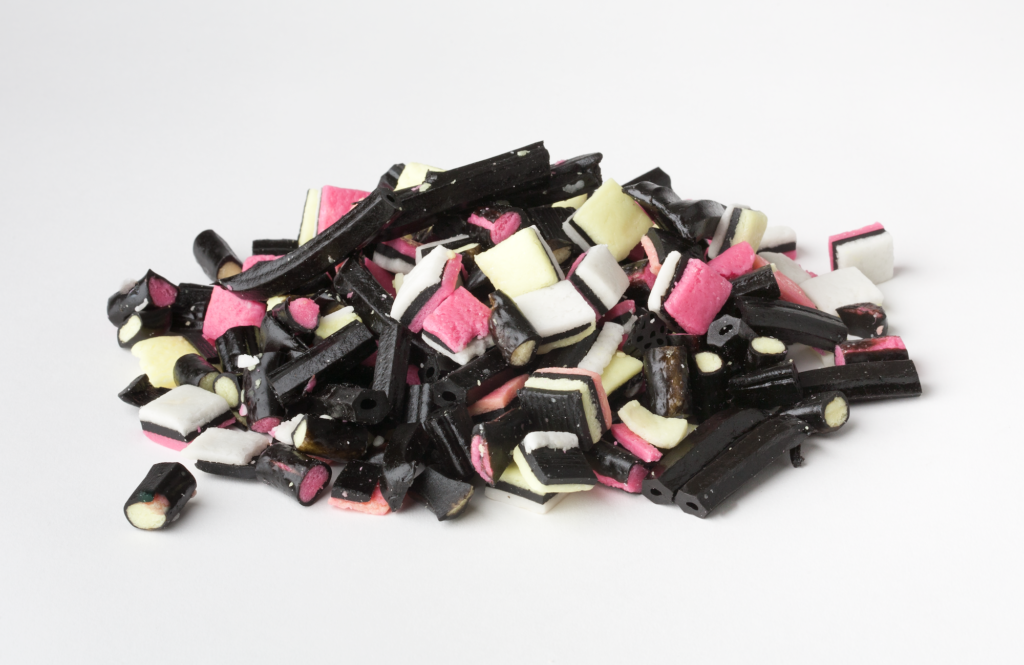 If you love licorice, Iceland is the place for you. In all honesty, it could be re-named Licoriceland. That is just how much Icelanders love their licorice.

And you could think you’re going crazy when you bite into the trillionth candy bar and find licorice in it but don’t worry – your mental health is fine. I doubt I can say the same about your blood pressure, though.

There are some licorice candies that are more scrumptious than others. You’ve got your licorice shoelaces, which in Icelandic are called Lakkrísreimar. Long strands of licorice, either plain, black and lovely or filled with some sort of marzipan. They are massively addictive – I dare you to try just one. If you like what you’ve tasted you can also have the licorice rolls, Lakkrísrúllur, that have the same effect.

Then there’s Þristur, or Three in English. That has been one of the most popular candies in Iceland for several years and is basically fudgy chocolate filled with little bites of licorice. If you’re feeling sophisticated I recommend the licorice chocolate bar or balls from Omnom chocolate factory – it’s divine!

Recently we Icelanders got yet another licorice filled sweet on the market. It’s the chocolate bar Hraun (see below) filled with licorice and marzipan. Sounds crazy but it’s so crazy it works! It’s called Appolo lakkrís bitar and you have to try it!

Kúlu-súkk is another combination of chocolate and licorice which has been widely popular, as are Djúpur, white chocolate balls filled with licorice. If you want to advance into the big leagues when it comes to consuming candy I recommend Sterkar Djúpur, white chocolate balls filled with licore but also covered in pepper powder, reminiscent of the filling inside Tyrkisk Peber hard candy. Last, but not least, we have Draumur, or Dream – one of Iceland’s most notable candy bar which is basically licorice laces wrapped up in milk chocolate.

If you’re not up to getting hypertension on your vacation in Iceland I would recommend you taste these non-licorice candies before you jet off:

Nóa Kropp – Crunchy, little chocolate balls that are dangerously addictive. These balls often come in seasonal variations, like peppermint, pepper or caramel, but the good old Nóa Kropp is always the best.

Kókosbolla – Fluffy meringue type goo inside a thin chocolate shell which is dusted with coconut flakes. You just can’t go wrong with a Kókosbolla! Try eating it whilst drinking a diet soda – I guarantee there will be a party in your mouth!

Siríus súkkulaði – Milk chocolate candy bars you can buy with various fillings. I recommend the caramel and sea salt one – it’s to die for!

Hraun – A crunch candy bar that looks like a piece of lava. You can also buy smaller versions of this one in boxes, simply called Hraunbitar, or lava bites.

Möndlur – The name translates to Almonds but don’t be fooled – this candy has nothing to do with the nut. You just have to try Möndlur – there are hardly any words to describe them.

And if you’ve managed to travel around Iceland without eating any candy, which is practically everywhere – can you tell us your secret?

More in Must Eat

The Best Asian Restaurants in Reykjavík

If you’re a fan of Asian cuisine, here are ten spots you cannot pass up. Must eat in Iceland. Eastern cuisine has enjoyed great popularity in Iceland for the last few decades, and the past five years in particular have seen a huge increase in the variety of flavors and cuisines on offer. Must See […]

It's getting cold and this hearty soup will warm you up.

Recipe of the month: Icelandic pancakes

Have you tried Icelandic pancakes? They are the best!

We searched and we found the best pizzas in Iceland

Get ready for carb heaven!