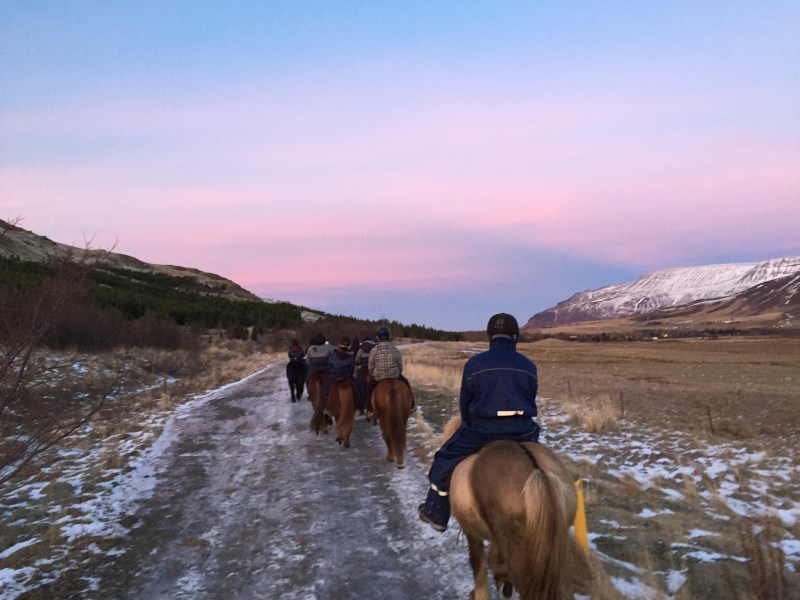 Australian writer Yazmine Lomax visited Iceland recently. Among the things that she did was to go horseback riding in Iceland, more specifically at Laxnes horse farm.

Yazmine wrote a beautiful and funny blog about her horseback riding experience and we at Must See in Iceland were so lucky to get to repost her piece on our blog. So, without further ado, here are some heartwarming words from Yazmine Lomax about horseback riding in Iceland. Enjoy!

The sky was a pink canvas, splashed with streaks of purple and gold. As the sun rose over Reykjavik, my horse and I rode further into the Icelandic country side. The grass was flecked with fresh snow and white mountains loomed ahead of us, interrupting the perfect sky. The only noises were the clipping of hooves and the horses’ rhythmic breath, sometimes the occasional neigh from the horses grazing in fields beside us.

Holding the reigns loosely, I couldn’t believe how stunning the landscape was, how peaceful it was to ride an animal in the wilderness, how absolutely perfect this moment was. I had to stop for a moment and think, This is my life.

Let me just clarify that before this moment, I’d never ridden a horse before. Well, not that I can remember. I’m sure I hopped on the back of a cute pony at a classmate’s birthday party when I was about five, but I have no recollection of it and I definitely didn’t have to do anything to control the animal. I’ve always thought horses are pretty, sure – especially the ones that have cute plaits in their hair! The elegance! – but I’ve never been a ‘horse girl’ and my knowledge of riding extends to the episode of The Simpsons where the leprechaun jockeys get mad at Homer and Bart because their horse, Furious D, is too damn good.

Yet somehow I found myself on the back of a horse. In Iceland.

Specifically, at Laxnes Horse Farm just outside Reykjavik city centre. Laxnes is a family run business that began in 1968 and I immediately felt the Mom and Pop vibe as our bus pulled up. The walls were peppered with framed photographs of guests and letters from excited riders, and the owners were eager to help me suit up for my first ever ride. Plus, they had a very cute dog who just wanted cuddles and someone to throw his squeaky toy.

I’d actually been to the farm the day before as part of Grayline’s Game of Thrones tour (I was a last minute addition when my trip to the south coast got cancelled due to crazy weather and, despite never having seen a minute of Jon Snow and co., had a really good time). Why, you ask, were we taken to a horse farm when Daenerys is the Queen of Dragons, not ponies? Well, because some of these bad boys had actually been featured on the show. Yup, I was in the presence of Emmy winning stallions. You could say I was just a taaaad jealous that these animals were more famous and successful than me. Kinda like the feeling I get when I remember Grumpy Cat is a millionaire and I just carried my laundry forty-minutes to the machines on campus so I didn’t have to pay $3 to have my undies cleaned in my apartment building.

Anyway, feeding the horses baguettes the day before was fun, but this was the real deal, the kind of experience that requires donning a snow suit even though I was already wearing thermal jeggings, jeans, a thermal top, jumper, and a down jacket. I was also handed riding gloves and a helmet, before being led to the stable to pick a four-legged riding partner.

This was it. I was about to ride an actual horse.

Click here to book the Game of Thrones Tour.

‘Give me the easiest one!’ I begged our guide. ‘None of that ‘he’s lovable but cheeky’ stuff.’
The man smiled in that wry Icelandic way and handed me the reigns of a little black horse. He told me the horse’s name, which was something long and Icelandic, but said I could call him Stake.

It was hard to think of Stake as either something that could kill a vampire, or Ron Swanson’s favourite food; he was just so cute! The ancient Icelandic horses are insanely strong animas that run wild around the land and spend winters outdoors in sub-zero temperatures… but they’re so dang small and fluffy!

Iceland actually made it illegal to import horses to the country way back in the 11th century which means the Icelandic horse is the only kind you’ll find on the island, and are very similar to the ones 900 years ago. For any horse girls among you, this isolation has preserved traits lost by other horses, like the five gaits (others have just three).

With some help from our guide, I was hoisted onto Stake’s back. Glancing around the paddock at the other riders and their horses, I was filled with a sense of euphoria. I was on the back of an actual horse! And I was only maybe 90 per cent terrified!

Turns out I didn’t need to be any per cent terrified; the ride was one of the most serene experiences of my life. What could possibly be more peaceful than clip-clopping through the Icelandic country side with snow-capped mountains in front of me and a fairy-floss sky above?

I’ll admit, it wasn’t all gazing at the scenery; some stuff was crazy! Let me list these things for you:

This was probably due to my terrible rider-ing but occasionally Stake would just decide ‘You know what would be cool? If I took off at top-speed and made Yaz wish she was wearing her sports bra instead of a regular one?’ Or sometimes, one of the other horses would take off and Stake would decide he should keep up with the crowd and attempt to qualify for the Melbourne Cup. Thankfully our guides were fantastic and helped me through the whole experience!

I’ll set the scene for you. The ride was going very peaceful. The small group of humans and horses were plodding around the countryside, breathing in the fresh air and all that. And then, because it’s December and that place is cold, we came to a frozen river.
‘No biggie,’ I thought. ‘We’ll obviously just have to find another route.’
Oh no.
No siree.
We were going across the river.
I watch, wide-eyed, as the first horse crossed the bed of ice.
And then, I heard the worse noise imaginable.
A crack. The ominous tinkle of smashing glass.
I screamed.
Basically, I had massively over-reacted and everything was absolutely fine. It was just a thin top layer that cracked and that horse, and all the others including mine, made it to the other side without a hitch.

OK, call me stupid all you want but I really didn’t think the horses would just lift up their tails and poop a whole heap as they’re trotting about. At least stop, guys!

I’ll never forget the magical day I spent at Laxnes Horse Farm. It was scary at first but I soon overcame this new challenge and settled into one of the most peaceful and beautiful experiences of my life. The only downside? I think I peaked too early. Riding a horse for the first time in Iceland is a bit like your first time to cycle a bike being in the Tour De France; it just can’t get any better!

Pack well and bring your camera.